Delhi lock down second wave corona 2021 The corona is out of its limit and that cause heave damage to all over India including the capital city where today Delhi recorded 357 deaths in the last 24 hours, which is the highest number ever in a day from last year. According to the report,

More than 24,000 Corona positive were reported in the state The positivity rate stood at 32.27 percent.

This order to extend the lockdown is likely to be said by the Delhi Disaster Management Authority (DDMA) today.

Although Last week, Chief Minister of Delhi Arvind Kejriwal had already announced a Delhi lock down second wave corona 2021 six-day lockdown till Monday, calling it necessary with the city’s resources at a breaking point in an escalating Covid case. “If we don’t impose a lockdown now,

we might face a bigger calamity. The government of India will take full care of you. We took this tough decision taking the situation into consideration and control the virus to affect more people

In the last few days, the whole of India including Delhi also face a shortage of oxygen cylinders in some of the top hospitals in Delhi continue to send SOS messages over oxygen shortage,

Delhi chief minister Kejriwal last evening made an appeal to all the chief ministers of state in a tweet. “I am writing to all CMs requesting them to provide oxygen to Delhi if they have spare.

Though the Central government of India is also helping us, the severity of corona is such that all available resources are proving inadequate,” 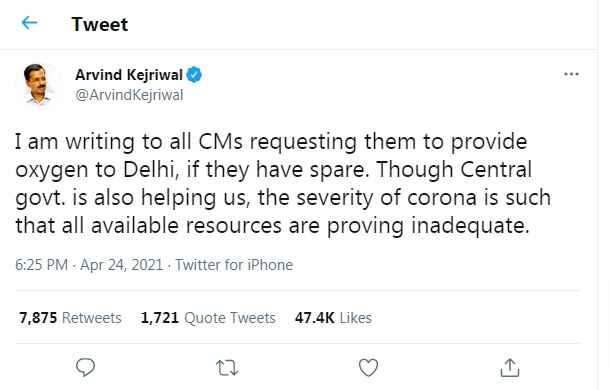 The alarming spike in cases in Delhi has put the city’s healthcare system under tremendous pressure as a whole of india. Even only on Friday night, Twenty-five people died at the Jaipur Golden Hospital which is located in Delhi due to a shortage of medical oxygen, as a top official at the hospital said.

On the same day Friday, at Sir Ganga Ram Hospital which is also in Delhi state, there are another 25 people died; the hospital told to news reports that it was unclear how many were due to oxygen deprivation, but the pressure that the crisis was very real.

As it is heard in a hospital’s petition on oxygen shortage, Delhi High Court on Saturday made several scathing remarks after the number of cases increased rapidly. that If anyone obstructs oxygen supply, “we will hang that man”, the Delhi High Court reportedly said.

The court also questioned the center over the preparation to tackle the second Covid wave which is going through.